I have installed the cloudera quickstart using docker based on the instructions given here.

when the container booted successfully. I saw that the hue service startup failed. but i ran it manually using sudo service hue restart and it showed OK.

this command was successful I got a message to connect to the CM using http://cloudera.quickstart:7180

Now in my browser on host machine I did

but everything fails to connect to any page. So even after doing port forwarding... I am not able to access either cloudera manager or HUE UI from the host machine.

I am using OSX.

I also went into virtualbox manager UI and selected the default VM. I went into settings -> network -> port forwarding. and made the following entries 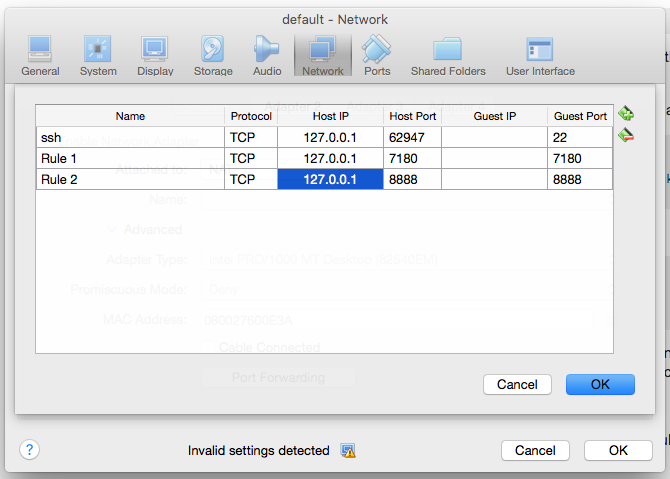 but still I cannot access the cloudera manager and HUE....

I was just trying to spin up the Cloudera quickstart docker myself, and it turns out this seems to do the trick:

Then you would want

The same issue happened to me. I was able start hue successfully after increasing the number of CPUs in VirtualBox. I also increased the amount of RAM earlier. The original CPU I had was 1, changed to 3

Restart Hue after container is up

Increase the memory of docker to 8GB if you can. Otherwise, set it at least 4GB. Let hue fail while starting the container. After that, attach to the docker container and access its shell to run the following command,

To stop the Hue Server:

To start the Hue Server:

I have encountered the same issue here, and resolved now based on the comments and posts above. There are two issues mentioned above:

In my case, this is caused by limited resources allocated with default docker VM settings. According to @Ronald Teo's answer, going to

, increase base memory to 8192MB, and processors to at least 3, have fixed my problem.

Otherwise you can execute docker ps and it will show you which ports it mapped the 7180 and 8888 to. Then in your host browser you can enter

If its all on your local machine, you shouldn't need the port forwarding.

Since you're running the docker machine inside a VM, you need to open the port on VirtualBox.

You can do this from the Port Forwarding button in the network adapter panel in VirtualBox.

You should see an SSH port already being forwarded for docker. Just add any additional ports like that one.